ONCE UPON A TIME

The story of the Petit Poucet

LOST IN THE WOODS IN VAL-DAVID 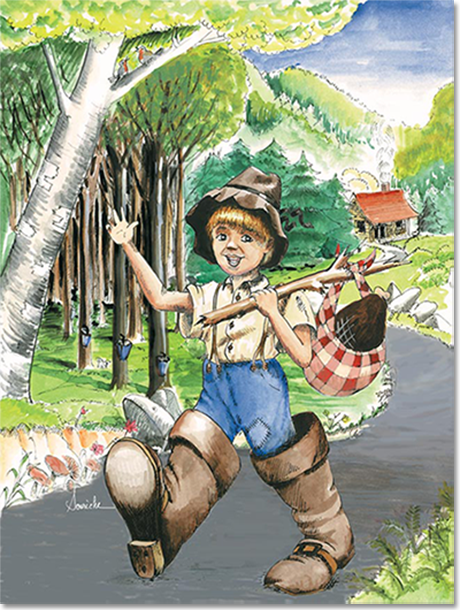 Once upon a time, there was a very poor family who lived in the forest in Val-David. There were seven children in the family, all of them boys, whom their parents loved very much.

One evening, the last-born child, who was known as the Petit Poucet, overheard a conversation between his parents. They were discussing the evident fact that it had become impossible for them to properly feed all of their seven children. There wasn’t enough money coming in. The Petit Poucet was the smartest and cleverest of the children. He decided to go away with his brothers to try and find a solution to his parents’ problem. Since they had never gone terribly far from the house before, the Petit Poucet decided to leave a trail behind them, by dropping small pieces of bread on the ground. However, when the boys decided to return home that evening, they discovered that the bread had been eaten up by birds and they were lost….

In spite of their tiredness, they continued to walk, hoping to find their house somewhere in the woods. Instead, they eventually found themselves in front of a huge castle. Hoping to find some assistance, they knocked at the door and a kindly-looking lady opened it for them. “My poor children”, she exclaimed, “you are at the house of the Nasty Ogre! Save yourselves quickly!” But they were too dispirited and worn out by their journey and they could not find the energy to get away. Instead they asked for something to eat and beds to sleep in.

As she was a good-hearted soul, she said she would invite them in and hide them in her daughters’ bedroom. To prevent the ogre from getting a whiff of the stowaways, their protector prepared a succulent ham, which she put on over the maple wood fire. The Petit Poucet and his brothers soon had a marvellous feast and with their stomachs filled, they went off to sleep in the bedroom belonging to the ogre’s seven daughters. When he came in, the ogre noticed a slight odour which was not quite right.“What’s that? Do I smell flesh on the bone?” he shouted.

The Petit Poucet heard the ogre cry out. Keeping his calm, he thought of a ruse which might save them all from being eaten. He removed the little crowns which the seven girls were wearing and replaced them with the rough woollen hats which he and his brothers had on. Then the boys hid behind the door. When the ogre tracked the smell down to his daughters’ bedroom, he came into the darkened room and touched his hand on one of the woollen bonnets. Certain that he had found intruders, he grew red and angry. “Now I’m going to eat you,” he said. The little girls woke up frightened and began to cry.

For a moment, the ogre didn’t understand the mistake but then he realized and tried to console his children. During this time, the seven boys had made good their escape. Furious about being tricked, the ogre put on his seven-league boots and took off in pursuit. The children were still running through the undergrowth when they heard the earth trembling behind them. The ogre was coming to get them! They tried hiding behind an enormous stone and soon saw the giant lying down to rest nearby.

As he lay down, the Petit Poucet carefully took off his magic boots: then he put them on and led the way home to his parents’ house. But he left soon afterwards for the castle with the idea of getting the famous recipe for the maple-smoked ham. The ogre’s wife never hesitated. She gave him the secret recipe, a whole ham and a bag of gold as well.

The Petit Poucet returned home a wealthy young man. “We can now stay together as a family and never again be hungry”. He then showed them the wonderful recipe for curing ham and threw the bag of gold onto the table. Ever since that time, you have been able to taste the same magnificent hams at the well-known Restaurant Au Petit Poucet, in Val-David.

Typical Quebec restaurant in a beautiful setting in the heart of the beautiful Laurentians, near a variety of recreational, tourist and cultural activities.

7 days a week
To serve you better!

It is not possible to make reservations in advance… But we make sure that our clientele is well taken care of during busy periods.